With SocietyTogether with Local Communities

Tokyo Century Group contributes to the public good and donates money to nonprofit organizations and groups as part of its social contribution activities. The Group also actively strives to engage in communication with local communities, including conducting cleanup activities in the vicinity of Group offices and holding industry seminars at universities.

Tokyo Century Corporation donated a total of ¥11,149,000 in fiscal 2019 to organizations, including social welfare corporations, public interest incorporated foundations and others. 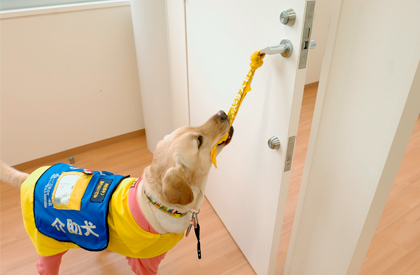 Service dogs are dogs which have undergone special training to assist people with hand or leg disabilities in their daily life. 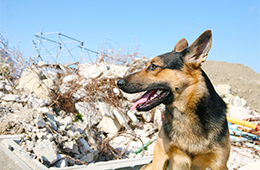 Search and rescue dogs are specially trained to search for missing people with their keen sense of smell in disaster areas which are affected by earthquake, typhoon, landslide and others. They are engaged in lifesaving activities in disaster areas affected by increasing occurrence of natural disasters.

Believing the Earth’s biodiversity to be irreplaceable, Tokyo Century Group engages in activities to raise awareness on and conserve it. Tokyo Century conducted a cleanup activity on the Enoshima Katase Coast. In total, some 100 employee volunteers and their family members participated. Tokyo Century Group also intends to continue to engage in environmental activities which contribute to local communities.

Tokyo Century continuously engages in educational and academic support activities which serve as an initiative to contribute to the creation of talented individuals who will lead the financial industry in the future.
In fiscal 2020, Tokyo Century employees participated in industry research seminars and career development classes at universities as guest lecturer for 8 lessons to provide knowledge on finance and leasing as well as the way of working.

*1 Number of lectures held at elementary schools, high schools and universities and the participants are as follows:

*2 Financial inclusion: This aims to educate the participants and improve their knowledge on the types of products and business fields in the non-bank financial industry.