Based on the awareness that thorough adherence to compliance is essential to the continued existence of a company, Tokyo Century Group strives to ensure the establishment of a system of management which will be trusted by society at large and in which all officers, managers, and employees act based on a just and high sense of ethics.

We report and review the Group’s compliance structure and operation as well as identified compliance violations at the Management Meeting and the Board of Directors every half year for review, including its effectiveness. Based on the results of the review, we make and implement compliance promotion plans. Apart from this, we oblige all the officers and employees to submit a compliance pledge once every year in order to comply with our compliance regulations.
In fiscal 2020, there was no major compliance violation, including human-rights violations deserving of public announcement.

At Tokyo Century Group, in the aim of early detection and resolution of risks, organizational self-cleansing improvement and enhancement of its compliance management, we have established an internal reporting system “Consultation/Whistle-Blowing System”, whereby officers and employees who become aware of acts of compliance violations being conducted or about to be conducted are obliged to directly report such matters without the intervention of their superiors.

(1) Outline of the Internal Reporting System

We have established three reporting routes as reporting desk: the in-house Compliance Office; the corporate lawyer’s office which is familiar with this field outside the company; and full-time corporate auditors in order to ensure independence and allow reporting persons to choose any route among them.
Reports can be sent by any way, such as by email, telephone, verbally or written form to the contacts which are stated in the Group’s Compliance Handbook that were distributed to all officers and employees as well as posted on the Company’s intranet.

Matters subject to reporting vary in a wide range, such as violation of the Anti-Monopoly Act or corruption, such as bribery that impedes fair competition, violation of the Financial Instruments and Exchange Act that undermines profits of investors and others, harassment, human-rights violations, violation of any laws concerning business operations, or misconduct which is against corporate ethics or internal rules.
In addition, the reporting system also covers the consultation when there is any doubt about compliance in terms of business execution.

All officers and employees are eligible to report such matters through this reporting system, including directors, officers, permanent employees, contractors, temporary staff, seconded employees, part-time staff and retired employees, even by remaining anonymous.
We strictly prohibit disadvantageous handling, such as disciplinary action, retaliation and others to the reporters for raising concerns by the Company, and secure anonymity of the reporter and keeping confidentiality concerning the report. 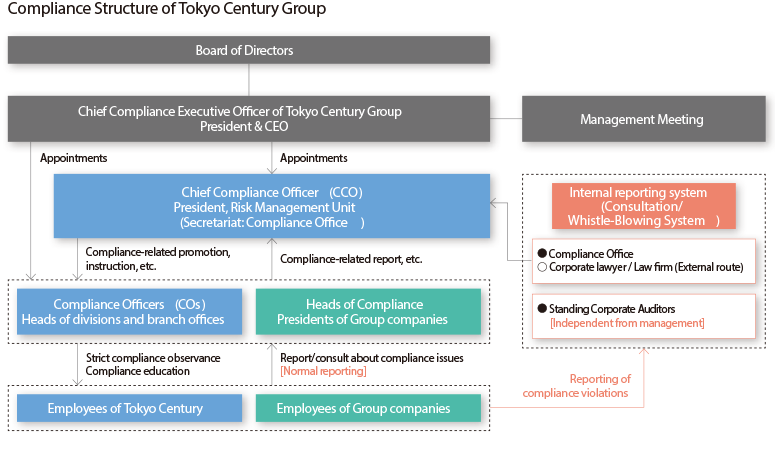 The Tokyo Century Group distributes its Compliance Handbook to all officers, managers, and employees and makes it available on its corporate portal at all times. The Compliance Handbook outlines our Management Philosophy, Corporate Code of Conduct, and compliance management regulations and other internal regulations. In addition, the handbook clearly stipulates the Group's stance toward respect for human rights and the prohibition of harassment. The Group also strives to improve the compliance mindset at our local subsidiaries overseas and has created an English and Chinese edition of the handbook for these companies. 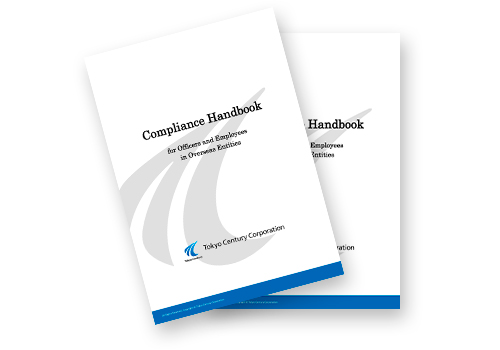 Aiming to ensure the thorough dissemination of a compliance-oriented mindset, Tokyo Century Group provides systematic and continuous compliance education through such means as rank-based training from new hires to newly appointed managers; e-learned-based training to all officers, managers, and employees, (including contractors and temporary staff); and compliance training at workplace conducted by compliance officers (the head of divisions and branch offices).

At Tokyo Century Group, we take an initiative to avoid anti-corruption through endeavoring to engage in fair, equitable and transparent transactions in any of our operating activities.

Tokyo Century Group prohibits offering entertainment, cash or any other benefits to domestic or overseas public officials in purpose of obtaining illicit profit, rewarding them for granting of favors or obtaining unfair business advantage either in direct or indirect through agents, consultants or any other third parties.

Tokyo Century Group carefully and appropriately undertakes businesses, especially in international businesses or business overseas, and strictly complies with the laws of Japan and local laws and regulations with regards to entertainment and the exchange of gifts to foreign public officials.
Our “Guidelines on Offering Entertainment to Public Officials” are available in Japanese, English, and Chinese to ensure awareness and disseminate among officers and all employees including national staff at Tokyo Century’s overseas subsidiaries.

Furthermore, in order to contributing to realizing a safe society and conducting healthy economic activities, the Group has set out and implemented various measures, including identification confirmation before concluding agreements with business partners to prevent money laundering and financing of terrorism that may foster organized crime.

Our commitment to anti-corruption efforts are specified in our compliance handbook in Japanese, English and Chinese while including them in in-house trainings, primarily e-learning and others from time to time, in order to fully spread to all managements and employees group-wide.

At Tokyo Century Group, we report anti-corruption efforts at management meeting and board of directors for review as part of its compliance structure and operation.

In fiscal 2020, there was no fine imposed on Tokyo Century and was no employee dismissed or disciplined for corruption.